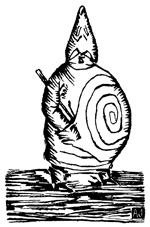 Pairubu, whose real name is Andrew, tells us he got his RR handle from the character in the Alfred Jarry play Ubu Roi. The original Pere Ubu was an all around good guy as well as King of Poland. He stresses that he is not named after the rock band of the same name (a band he did not like for a long time but now appreciates). The woodcut at left is of the original Pere Ubu by Alfred Jarry himself. Pairubu has been a long time member of the community and did his first hosting gig on Sept. 5, 2013 for the topic of Shyness.